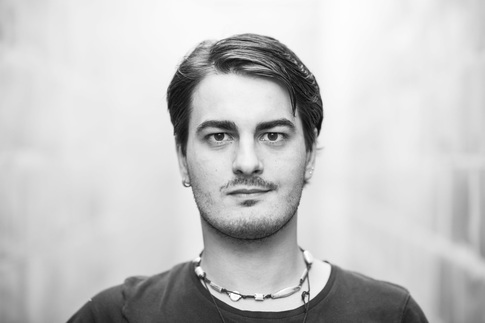 Foto: Lovis Ostenrik
Giovanni Firpo is an actor and theater director,
born in Arezzo May 14, 1986.

After completing high school he moved to Bologna where he graduated in Ethno-Anthropological Sciences at the Alma Mater Studiorum. Here, in 2012,  graduates as Actor at the School of Theatre of Bologna "Alessandra Galante Garrone," where, in addition to having studied with Claudia Busi, Vittorio Franceschi and Alessandra Frabetti, collaborates with the Teatro Comunale di Bologna in opera productions directed by Mario Martone (the marriage of Figaro), Henning Brockhaus (Lenz), Roberto De Simone (Turandot) and Bob Wilson (Macbeth).

From 2012 to 2016 he was invited by Bob Wilson at the INTERNATIONAL SUMMER PROGRAM at the Watermill Center of New York where he worked with the Texan director as actor, performer, movement coach and assistant director for numerous installations and productions (including DOM PERIGNON at the chapel of the palace of Versailles, "Macbeth" by Giuseppe Verdi in San Paolo Brazil and Bologna, and "La Traviata" by Giuseppe Verdi in Linz, Austria, and Perm, under the direction of Teodor Currentzis)   In 2015 he graduated in Directing at the National Academy of Dramatic Arts "Silvio d'Amico" where he directed, among other works:

– “A” The tragedy of Hamlet Prince of Denmark
Festival Contaminazioni 2013

From 2013 to 2015 is a Board Member of E:UTSA – Europe: Union of Theatre Schools and Academies

2015 - Second Prize - PREMIO ABBADO, Directors' Section (organized by the AFAM institutions and sponsored by the Ministry of Education) with the Grand Guignols' Theatre play "The Innocent Criminal"

From 2013 to 2016 he develops BALLET CIMATIQUE, a training method for actors, dancers and singers, that involves body, breath, composition and stage dramaturgy. He developed the method in New York (Watermill Center, 2013-2014) and held a workshop with european and asian students during the European Young Theatre Festival held during the 58th Festival dei 2 Mondi in Spoleto in 2015.

In November 2016 is founder and president of OFFICINE MONTECRISTO.